Last night was another meeting of the Columbia Pike Implementation Team, the small stakeholder team that has been giving feedback as the Columbia Pike Multimodal Street Improvements Project works its way toward completion. For those who are just now hearing about this, here's the scoop.

The County is looking to rebuild Columbia Pike and in doing so, make it as much a "Complete Street" as possible - that is, a street that balances the needs of drivers, bicyclists and pedestrians. Previously, there had been a group called the "Columbia Pike Street Space Task Force" which created a set of recommendations for what an ideal Columbia Pike would look like. This current project is working to implement as many of them as possible given the current constraints we have to work with (primarily, Right-of-Way constraints). The handouts from last night's meeting aren't on the website yet, but the design isn't hugely different from that shown at the last meeting if you want to follow along with that PDF.

Like most County projects, the study group consists of some planning consultants (in this case, Kimley-Horn) who do all the math, the mapping, the traffic data collection, etc and a small group of "stakeholders" who give feedback on their work. In this case, that group is the Columbia Pike Implementation Team - it has citizen representatives from the nearby Civic Associations, County transportation staff, local business and property owners, members of Arlington advisory commissions like the Planning Commission, etc. The thinking, I believe, is that you can get more work done efficiently with a smaller group of people. If you'd like to be part of that small group of people, you can sign up to be notified at the project's website. Once the study gets farther along, they will hold full-on Public Hearings which will be much more widely advertised (at last night's meeting they were asking for input on whether the first Public Hearing should be before or after the holidays). 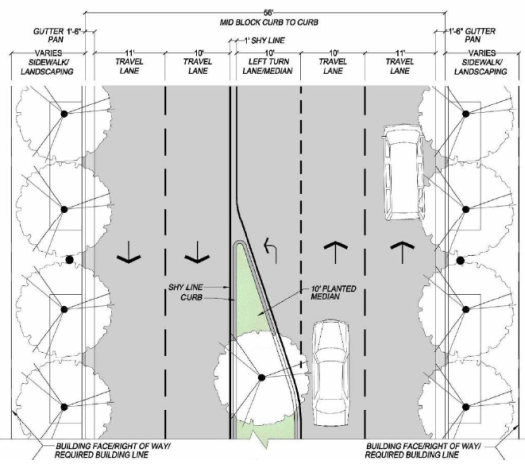 Behind the curb, the usable amount of space for sidewalks, landscaping, etc. varies widely and the final plans for what the "behind the curb" area should look like are still in flux - particularly what style of landscaping is most appropriate to the various areas - a continuous strip of grass / tree boxes / other?

On some portions of the Pike, the current Right-of-Way does not allow for the 56' cross-section, for instance the Four Mile Run bridge and the stretch of Columbia Pike near the Navy Annex. For the most part, the current plans stick within the existing Right-of-Way though it currently calls for some Right-of-Way acquisitions in a couple of select spots.

The plan as currently designed will result in wider sidewalks almost everywhere on the Pike, shorter crossing distances at most crosswalks, additional signalized crossings as a result of several proposed new traffic lights and pedestrian refuges at many crossings. The additional landscaping/trees should also help isolate pedestrians from traffic to some degree.

While the plan does not currently include any bike lanes, it is designed to tie-in with the Columbia Pike Bike Boulevards project and will include a 10' clear width shared-use sidewalk/sidepath on the north side of the Pike extending from the western terminus of the bike boulevards down to Jefferson Street and from the eastern terminus of the bike boulevards up to Joyce Street.

The current plan will add several left turn lanes that do not currently exist on the Pike, helping to alleviate the "Pike Slalom" where drivers often have to repeatedly switch out of the right lane avoid stopped buses and out of the left lane to avoid stopped left-turning vehicles. The plan also proposes several additional traffic signals to aid in those left turns, adds some additional on-street parking, re-aligns Four Mile Run Dr (minor) with Buchanan Street consolidating two Pike intersections into one and rehabilitates the road surface and substructure finally banishing the horrid rutting and pothole problems that plague many portions of the Pike.

There seem to be two main areas of feedback / disagreement so far in the process:

The first is in regard to bicycle facilities. While the bike boulevards and sidepath are generally an upgrade over the existing conditions, there has been discontent voiced from the cyclist community that dedicated bicycle facilities like a cycle track would go much further to eliminate bike/pedestrian conflicts. While not part of this project, the multimodal group is coordinating and (literally) "paving the way" for the Streetcar and the addition of the Streetcar tracks to the curb lane will eventually make biking directly on the Pike a non-starter due to the inherent incompatibility of streetcar tracks and bicycle tires. Whether the sidepath and bike boulevards are "enough" to properly support biking in the corridor is definitely one of the lingering questions and sources of contention with the current plan.

The second revolves around the tree-lined medians. In early versions of the plan there were many more of these and they restricted access into and out of many of the Pike driveways and a couple of side streets, but based on feedback from the team (primarily the President of the Penrose Civic Association) these have been pared back in the most recent version. There was some discussion last night about the tradeoffs that the medians represent. On the positive side, their existence serves to: 1. narrow the visual appearance of the road which encourages drivers to slow down closer to the speed limit, 2. contribute quite a bit to the environment - air quality, shade, water filtration, etc. and 3. blocking access to some of those left turns would help alleviate congestion on the Pike and prevent potential collisions in the so-called "chicken lanes" that currently exist on the Pike (those are the areas where the middle lane allows left turns from both eastbound and westbound traffic). On the negative side, restricting turn access for those driveways is a daily inconvenience for the residents of those apartment buildings and the customers of those businesses. So far, the opinions seem to be stacked on the side of those wishing to maintain driveway access at the expense of the medians.

Next Steps / How Can I Get Involved?

While last night's meeting materials aren't up yet on the project website yet, I expect them to be there soon; all of the previous meeting presentations are posted. Once they are up you can review them at your leisure and submit comments using the form on the project website. If you'd like to be informed of any future meetings, there is also a form on the website to sign-up for notifications. The design is not finished, it's not even at 50%. If you want to help shape the Pike for the next several decades, this is your chance. Want even wider sidewalks? Better bike facilities? Wider travel lanes? More medians? Fewer medians? Make your opinions heard!

Keep in mind that these plans are the near-term plans. As redevelopment occurs, additional right-of-way can be acquired to more fully "Complete the Street" providing additional facilities for pedestrians, cyclists and drivers.