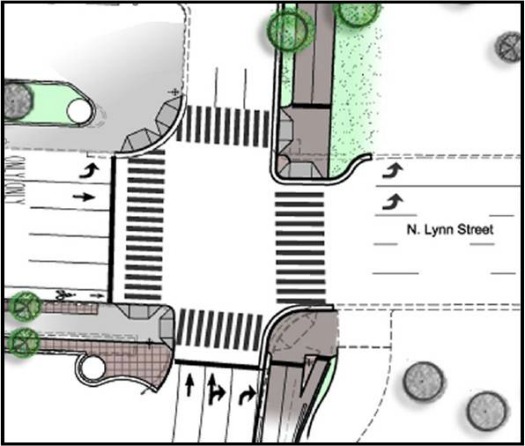 Technically, the "N. Lynn Street Esplanade and Lee Highway/Custis Trail Safety Improvements Project" meeting...cause that really rolls of the tongue. This post will detail my understanding of the project based on the presentation at the meeting - I am not speaking directly for the County, VDOT, or anyone else.

The project is really two projects rolled together to reduce construction costs - it was originally the Lynn St Esplanade project whose goal was to improve Rosslyn's connection to the Potomac River through improvements on Lynn St; this project is funded through the community benefit money contributed out of the Westview Development site plan process. A 2nd project to improve pedestrian and bicycle safety in the Rosslyn Circle area was rolled in when a federal grant was received to implement those safety improvements. These improvements focus on the Custis Trail and the various intersections it crosses in Rosslyn.

The main features proposed in the project: 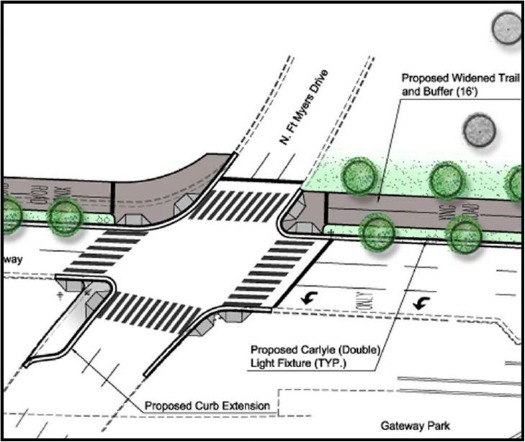 Turn out was pretty light at the meeting and the vast majority of the attendees appeared to be regular cyclists. Throughout the presentation, attendees were quite supportive of the project overall, but repeatedly brought up concerns that the project doesn't do enough to improve safety at the troublesome Custis / Lynn St intersection. The project manager was quite frank that the project was a compromise and that they are doing what they can. He said they extensively modeled many different lane configurations and movement options for the I-66 off ramp, but everything they looked at resulted in extensive backups of traffic onto I-66 which is a big no-no as far as VDOT is concerned and is quite troubling for the County as well. They specifically mentioned that they explored the "no right on red" idea for the off-ramp and it was a no go from a traffic standpoint. When asked about the proposed tunnel for the Custis that would go underneath these intersections, he said that the improvements were being made such that they would not preclude that tunnel being built as part of a future project, but even if it is built some folks will opt for the surface route so best to make what safety improvements can be made. He went on to say that from an engineering standpoint, the tunnel is feasible, but would require the cooperation of NPS which has been extremely uncooperative in this entire project (which is why the project basically stops dead at the NPS property line) and would also require the acquisition or other accommodation of some private land which had been involved in a property dispute / lawsuit until very recently.

Currently the plans are at the 50% mark, they have not been finalized and VDOT has not given its final approval. VDOT is especially concerned and hesitant about the lane removal on Lee Highway and would like to gauge public support of that portion of the project specifically before giving final OK. Plans should be completed this coming Summer with final VDOT approval next Fall and construction beginning in 2013. If you have an opinion on this project, for or against, or have specific questions, PLEASE contact the project manager.

Thanks for covering this, Chris.